The city has closed off our street for cleaning. Cars have been removed and big trucks have come in. One goes up and down each side of the street, sweeping debris and sanding material left behind from the city’s Snow and Ice Control team. After the sweeping, another truck drove down the middle of the street spraying a sheet of water to either side of the street. In great arcs the water reached right to the curb and lay in rivulets at the side of the road.  The water truck passed by more than once.  Thousands of roads are being “cleaned” in the same way and all I could think of as the truck passed by yet again, was what a waste of water it was.

I was drawn back to a time, years ago, when I had seen a documentary on water. ‘A World Without Water’ was made in the early 2000’s and told the story of people living in places where water is a commodity: If you want water then you will pay for it. If you can’t pay for it you get no water and you will have to find it yourself. In some places this means that people have to walk long distances to get water and that water, in most cases, is unfit to drink without first boiling it. Some people, like those in Detroit borrow from neighbors or get it illegally.

A scene from the documentary that has long stuck in my mind shows a poor family in Bolivia standing at their house looking over a tall, chain link fence with barbed wire across the top. On the other side is the water treatment plant. A vast waterfall pours through the cement maze to the plant. This is water that this family cannot have. They cannot afford the fees that the water company is asking for and therefore they get no water. The stories the family tell are heartbreaking. The water source that they use is far from their home and filled with bacteria and it is because of this that they lost a child. Their youngest child was constantly sick, suffering from diarrhea, something that kills a large number of children around the world every year. Clothes and bodies cannot be washed as regularly as needed to maintain good health. The stigma that comes to people who cannot afford water is awful. Shunned by their neighbors for being dirty and poor, children are left with no one to play with and parents who cry in silence because they want more for their children. 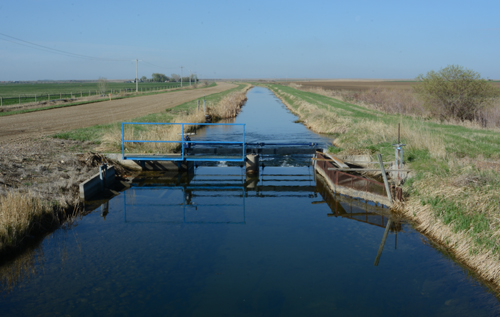 Will this canal one day have a high fence around it to keep people from getting free water?

One night as I sat around a table with a group of immigrants from Africa our discussion fell to water. One of the most poignant things said that night was from a man from Ghana who said “I still can’t believe that the toilets here in Canada use fresh (drinkable) water to wash away our own waste.” Something that is rarely thought of in water-rich societies.

Canada is a land rich in water. Environment Canada reports that we have 20 percent of the world’s fresh water. That statistic and the fact that a tap can be turned on to instantly give us a drink has us all believing that there is no need to worry about water.

Bolivia isn’t the only country in the world who put a price on water. The privatization of water is big money and companies all around the world are quickly jumping to put locks on taps and high fences around lakes and rivers to control what should be a basic human right. One has to wonder what is next. Will air one day be something that we need to buy?

The city of Calgary’s website states that during the 2013/2014 Snow and Ice control season approximately 100,000 tonnes of sand and salt mixture, called Pickle, was used to clean over 15,000 lane kms. During spring clean-up City crews typically remove about 50,000 tonnes of debris. A city of Calgary employee, who would not give her name, stated in a telephone interview that as of June 19 the city has used 33,801 cubic meters of water and that they expect the clean up to be completed in July, with no specific date given and she could not tell me how much more water they expected to use.

“The water the road crews use is from their own depots and they will also use fire hydrants if needed,” she said and confirmed that the water used for the spring clean up is fresh, drinkable water. She could not, however, provide information on the cost of the water used but did verify that the price tag attached to the spring cleanup was six million dollars.

It leaves me thinking:  will I have to not only save for retirement but also save for the day when I will have to pay for my next drink of water? 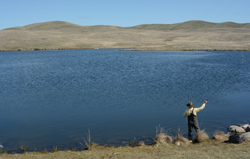 A man fishes at a reservoir in southern Alberta but how long will he be allowed to do that?