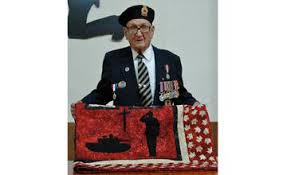 Charlie Fielding holds his quilt presented to him by Quilts of Valour Legion on July 12.

Eight Quilts were presented at the Hanna Legion on July 12 to soldiers who served in the forces from the area by Hanna quilters involved in Quilts of Valour (QoV).

QoV is a national organization that makes quilts for soldiers who have returned from war and are recovering from the effects of it or veterans who have served in the past.

Corinne Hewitt says that the women in the Hanna quilting group made 15 quilts last year for the QoV.

Once completed the quilts were sent off around Canada and Hewitt began to wonder why they ween’t making quilts for their local veterans.

“Since we make quilts for others we wanted to give quilts to veterans in our area to honour them,” said Hewitt.

She went on to say that Diane Lance from the Hanna Legion was a big help to the group and provided them with names of locals to receive the quilts.

Each quilt is individualized with the shadow of a cross and either a jeep, tank, airplane or ship stitched into it, depending on what detachment the person served with.

Another shadow of a soldier was stitched along with them and for the two woman who received the quilts, the shadow was of a woman in uniform.

A special block was stitched to the inside of each quilt which said that the quilts were handmade with love, respect and gratitude for the soldiers sacrifices to Canada and was also personalized with a list of medals or other details pertaining to the person the quilt was made for.

All recipients of the quilts were present, aside from Cade Seely, who was serving as a police officer in Calgary and couldn’t attend the event. His mother, Joy Seely received his quilt on his behalf.

Some of the veterans were surprised that the quilts were their’s to take home, others were speechless.

Charlie Fielding, recipient of a quilt, gave a speech to the crowd.

Fielding joined the military when he was 21 years old and served for 29 years. He lived with his family in Germany and was all over Canada during his years in service.

“War has changed for soldiers now,” he said, going on to explain that bombs can be anything now, set off from anywhere and he enemy can be anyone; children, the elderly, plain clothed, every day people.”

“During my time (at war) we were friendly with the local children,” he said.

He went on to say that there were many other people who were involved in the war that weren’t at the front line that made such a difference to the war effort and spoke of school children being involved in picking up shrapnel and women taking on men’s jobs back in Canada.

“Many girls quit school to help out in the war effort,” he said.

He highlighted peopole who did the small things like filling food orders and sending soldiers packages.

“They did so much, no one knows how much help we got from the people in Canada,” he said.