There are some destinations that seem like a myth, places I’ve heard of but not many people know about. Those are usually places I keep in the back of my mind, gather what information I can and eventually, set out to find them.

Hidden 56 kilometers southwest of Medicine Hat, Alberta on Highway 887, sits a natural wonder that I’ve wanted to visit for over a year. It was another drive down dusty, gravel highways but the drive was worth it.

Stretched out over 800.96 acres, Red Rock Coulee Natural Area is an eerie landscape with huge red boulders scattered over a relatively small distance that can be viewed without walking far. From the parking area you can see the red rocks scattered across the landscape, with the Sweetgrass Hills of Montana off in the distance. 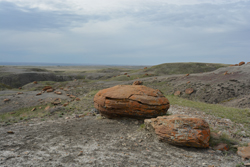 It’s a bit of an eerie landscape.

The round, red boulders are a striking feature against the badlands topography that has formed here. The sandstone concretions are up to 2.5 meters in diameter and are among the largest in the world. Formed in prehistoric seas as layers of sand, calcite and iron oxide collected around a nucleus formed by shells, leaves or bones. Over time they grew larger as waters deposited more layers. The resulting boulders became harder than the surrounding material, so when water erosion carved the coulee, the softer material washed away, leaving the red rocks exposed. The reddish color comes from iron oxide, formed when iron is exposed to water and oxygen. 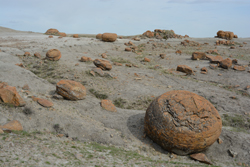 Huge red boulders are scattered through the coulee.

The thin layer of soil covering the bedrock has been eroded by water and wind leaving behind a badlands landscape where the bands of color in the bedrock can be seen. These colorful layers are made of shale, sandstone, ironstone and clay made of volcanic ash. The coulee, steep sided in places, holds sagebrush and prickly pear cactus and is a stark contrast to the undisturbed tall, green, grasslands, waving in the wind that surround it. Wild flowers and lichen on the rocks add to the cornucopia of colours.

Red Rock Coulee isn’t widely known and doesn’t get a lot of visitors, aside from rattlesnakes. Don’t be surprised if you have the whole place to yourself. It’s like walking onto the moon or Mars in places and with the vast array of bird song breaking the stillness and acres of land to walk, it is a perfect place to go hiking for the day. 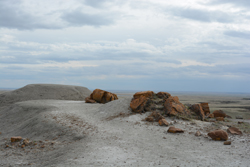 It looks like you are walking on the Moon in places.