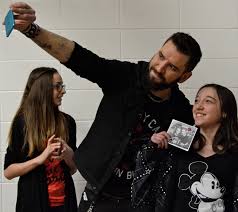 Shelby Dabbs eagerly awaits her turn to talk personally with performer, Robb Nash and maybe snap a selfie with the growing star like Brittany Bowthorpe did. Nash stayed after his concert was done to talk with the students at the Coronation school on Feb. 12.

Suicide amongst our young people has been in the news a lot as of late. Being a young person is hard and for many are filled with dark days.

Robb Nash is someone who is trying to help young people deal with those issues. He is becoming nationally known for sharing his incredible story with students across Canada, inspiring them to live lives of purpose.

Nash came to our students to tell them that everyone has dark days. The singer, musician and speaker gave free concerts in Coronation and Consort on Feb. 12, with various schools from the areas attending his concerts.

Nash not only talks about mental health and the struggles that people often go through but also plays guitar and sings songs talking about the issues surrounding mental illness.

“It was hard to hold back tears during some of his songs.” Damyen Rocque, a grade 10 student at Coronation School, “they are pretty moving.”

At 17 years-old Nash was in a serious car accident and was pronounced dead at the scene. By the time the ambulance had arrived to take his body to the hospital, Robb’s pulse had miraculously returned but he was left in a coma.

When he woke from the coma it was tough, he had a lot of dark thoughts and despite significant physical and emotional scars, Nash was left with a new outlook on life. He wondered if there were others who had gone through something big and were feeling the same way.

With song and personal stories Nash deals with issues affecting students including bullying, drug and alcohol addiction, depression and suicide. He positively influences them to stay hopeful and to recognize their strengths. Overall his message is about hope when you need it most.

Nash has been so effective in his performances that he has had people handing him suicide notes after the concert and many young people have said that he has saved their lives.

In an interview on Canada AM in January for Bell’s Let’s Talk Campaign, which he was a spokesperson for, he said that he was told by police that people usually write their suicide notes two to three months before they actually commit the act.

To date he has received over 270 notes. That’s 270 kids lives he’s saved, not counting the others who never gave him their notes but have been steered away from that path by his words and music.

“When kids write those notes what they are really saying is ‘I feel insignificant’. Being significant is important, it means we are impacting people around us,” he said in an interview after the Coronation school performance.

When asked what the one thing he hopes kids take away from the show he said, “That’s touch, everyone takes something different away from it.” He went on to say, “We all are going to have tough days but we have the strength to get through them.”

Nash is originally from a small town in Manitoba where there were no resources for people with mental health issues.

“It’s important to me to reach out to smaller communities. I said a long time ago that I didn’t want to play in only the big cities.”